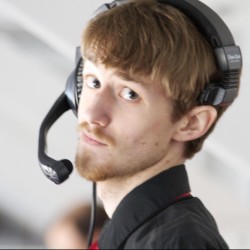 I write code and do other cool stuff.

Learn a little bit about me!
...or check out some of my projects!

I'm a recent graduate of Rensselaer Polytechnic Institute, where I earned a Bachelor's degree in Computer Science and a Master's degree in Human-Computer Interaction.

I contribute to various open source projects in my spare time, and I've also done a lot of video production and editing.


I built this site using Bootstrap and Masonry.
Bootstrap theme 'Cyborg' by Bootswatch. The RPI TV Titling System (RPITS) is a program designed to render, organize, and control graphics being overlaid on a video feed. It is actively used in RPI sports broadcasts and seen by thousands of hockey fans each weekend. My contributions included refactoring the legacy PHP codebase to streamline production configuration time and adding new usability features to reduce user error rates. For an exhaustive list, check out the project on Github!

Dewdle is a lightweight telestrator program I wrote using HTML5 and Node.js. It's also open source, so all the code is available on Github! RPI TV's Scoreboard system is an SVG-based open source program used to create a scoreboard overlay for a sports broadcast. Check it out being used for an RPI sports broadcast or look at the code on Github! Recon Rally was a mobile application I helped design to provide members of the Rensselaer community with an interactive campus experience. Through the use of QR codes and NFC tags on campus buildings the app would provide information about a building's history and significance to RPI.

This video plays before all RPI Women's Hockey home games on the Houston Field House video board.

Designed as a team project for RPI's Software Design and Documentation course, Social Scheduler unites social media and course registration. Students see courses their friends have registered for and can join them (or avoid them).

This site is an ongoing project of mine, designed as a single-page website using Bootstrap templates and custom javascript routing. Hopefully you'll have a chance to view this on a variety of devices! A short-lived project of mine to simplify updating college hockey rosters on Wikipedia. Some components were rolled into the RPI TV Titling System, and the code is still available on Github.

The RPI TV Titling System is one of the primary components of the RPI TV Graphics Suite. It is an open source program (under the MIT license) designed to generate titles and graphics to be placed on a video feed. The system consists of a front-end interface that handles the editing and rendering of PNG graphics that get handed off (via HTTP) to a keyer that overlays them on frames of video. Given the generally sports-oriented nature of RPI TV, it also contains a robust system of handling schools, teams, and rosters, allowing for player statscards to be automatically generated.

My work on the project has been primarily focused on streamlining the pre-game workflow, making it easier to set the system up for each game, as well as fixing components that are frequent causes of user error.

Check it out being used for an RPI sports broadcast or look at the code on Github!

The RPI TV Scoreboard program (licensed under GPLv3) which generates an SVG scoreboard that is then overlaid on a video stream. Score, time, penalties, and other game data are entered and tracked to ensure that the proper game status is displayed. Check it out being used for an RPI sports broadcast or look at the code on Github!

This video was edited together in the summer of 2014 for the RPI Women's Hockey Team and plays on the Houston Field House video board before all of the team's home games. Footage and photographs ranged from recent games to the early days of the program.